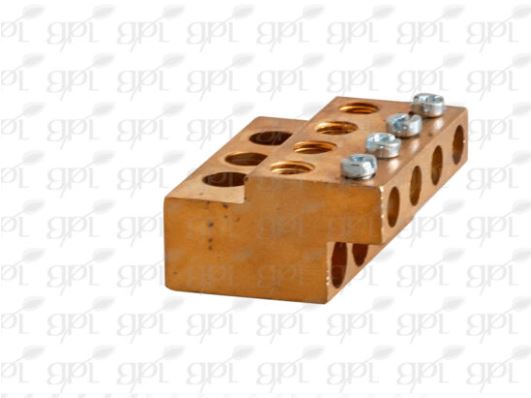 What is an electrical terminal block?

An electrical terminal block, commonly known as a terminal block is a modular connector that is designed for establishing a stable and secure connection when two or multiple wires are put together, in order to manage complex electrical circuits. They are even used to attach wires to the ground or establish earth connections.

What are they made of?

The body of an electrical terminal block is made of melamine or polyamide material. These blocks primarily use copper alloy, so as to establish bare minimum contact resistance. It is the wires that are safely connected to the current bars using various types of clamps such as spring clamps, screw clamps, nuts, bolts, and studs. Sometimes various types of lugs and ferrules are even used to connect these wires to the electrical terminal blocks as per their use, current, and voltage ratings.

In the electrical industry, a variety of terminal blocks are used depending on their application and of course circuit requirements and are majorly used in panelboards so as to mount other electrical types of equipment like MCB’s and MCCB’s.

The Use Of Terminal Blocks:

Although soldering, wrapping or twisting are great options for connecting wires, using terminal blocks is always a better and safer alternative. This is because they offer a lot more flexibility compared to others.

Terminal block wiring is organized and neat, providing convenient identification in case of modifications and also allows for easier troubleshooting.

As mentioned earlier, terminal blocks used in the electrical industry are of various types which in turn depends on the method of connection used. Here are some of the most common types of electrical terminal blocks which we are going to discuss.

Apparently, a ground terminal block looks like a screw-in terminal block. However, instead of simply connecting wires, these connect the incoming wire to the ground which is further terminated by the panel or the DIN Rail where the block is mounted.

As the name suggests, these terminal blocks have a fuse put inside in a series at the centre of the wire-in and wire-out. This cancels out the requirement of the external over current protection. In order to make troubleshooting easier, many manufacturers often place a Fuse Failure LED Circuit within the block so that it visually indicates the condition of the fuse.

In cases when the space is limited, individual terminal blocks are often grouped in clusters and are generally structured with multi-level configurations. Each of these configurations has multiple layers such as a Triple level one which has three layers.

Get our latest Product Catalogue